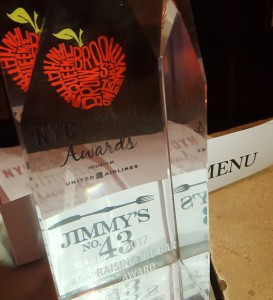 Last night Jimmy’s No. 43 and a few of our good friends were recognized at the New York City Hospitality Alliance Awards 2017. Our award was for “Raising the Bar,” which acknowledges an influential bar in NYC. We’ve always tried to be an active part of our community, and we are humbled to be honored by the Hospitality Alliance.

As one of the founding members of The Good Beer Seal, which recognizes craft beer bars that go beyond simply serving up great beer, Jimmy’s No. 43 is also a member of the East Village Independent Merchants Association (EVIMA), which was formed out of the aftermath from the East Village gas explosion last year and has helped support area merchants along with founding a Taste of the East Village event that takes place in the fall.

Owner Jimmy Carbone (who is also acting president of EVIMA) notes, “It’s important for bar, pub, restaurant and brewery owners to be active in our communities. At Jimmy’s No. 43, this includes participating in Lower East Side History Month (taking place right now) and supporting our neighbors, like St. George Ukrainian Catholic Church, which is having its street festival in a couple weeks. We’re also doing what we can to support local brewers and cider makers along with small farms and local producers both in-house and at some of our outdoor festivals like Pig Island.”

Among other award recipients last night were good friends Brandon Hoy who was awarded “Best of Brooklyn” for his Bushwick restaurant, Roberta’s (where we record Beer Sessions Radio on the Heritage Radio Network), and Jake Dell of Katz’s Delicatessen (True Taste of NYC Award).

Thank you to the NYC Hospitality Alliance for being counted among such a great group of businesses and community leaders throughout the five boroughs.