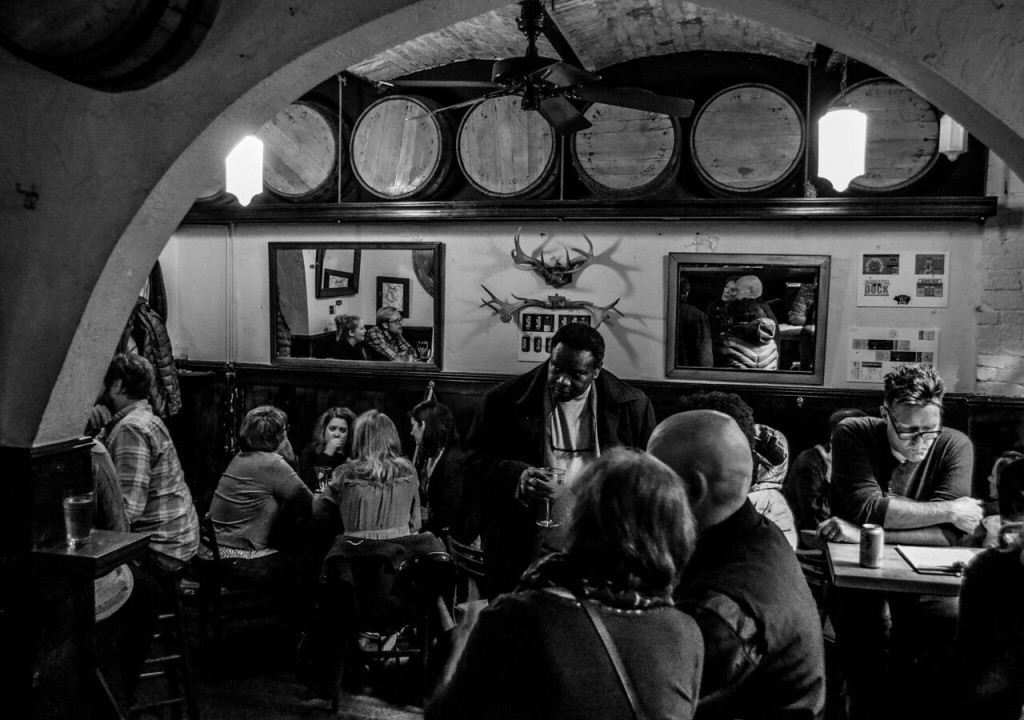 While winter may be grasping at the heels of spring, the latter is coming (we promise), and with it will be many stalwart friends of Jimmy’s No. 43. We have a great chance to catch up with beer pioneers, future beer judges, our favorite photographer, some great authors who write books on artisan spirits, plus some non-profit friends and new pop-up kitchens. So much to see, learn, imbibe and enjoy!

First up (and we’ll have one less hour to wait for it, as DST starts this weekend) is the return of our good friend Jeff Cioletti, who will be leading an Irish Whiskey tasting next Tuesday, March 14th, in celebration of St. Patrick’s Day. Jeff will be pouring his favorite whiskeys to pair with a traditional corned beef & cabbage buffet-style dinner. You can still get tickets here. The event is part of Jimmy’s Spirit Council, a series of monthly tastings where we support spirits and foods and the people who talk and write about them (in April, it will be Lew Bryson and bourbons).

The Spirit Council isn’t the only new addition to spring’s drinking “must dos”: We’ll be featuring West Coast Pioneers throughout the coming months, harkening back to craft beer’s early days. Next up in the WCP series is a Stone Brewing night on Wednesday, March 22nd. Come by (Enjoy By?) and drink some great west coast IPAs; we’ll have several of Stone’s best on draft and by the bottle.

On Tuesday, March 21st, we’re welcoming back photographer Ann V. Reilly , whose curation of beer label art has been part of our “Wall of Foam” series the past few years. She’ll have new photos mounted and you can see them yourself and meet Ann as part of a Beer Label Art Party. See the art. Drink the beers. Pay as you go.

We’re also going to be featuring more pop-up kitchen take-overs this month, including a fabulous ticketed dinner with Ben Conniff of Luke’s Lobster on Thursday, March 16th. Or if brunch is more your style, be sure to join us on Sunday, March 19th, as we welcome back Chefs Consortium for a laid-back buffet brunch (more info/tickets here).

And speaking of welcoming back… It’s time to quack quack as Slow Food NYC brings its annual Duck Cook-Off to the restaurant on Sunday, March 26th. You can support a great cause (food education) and get your duck face all at the same time!

Also back at Jimmy’s No. 43? The NYC Homebrewers Guild with their annual Beer Judge Certification Program (BJCP) classes in the Backroom. Be sure to say hello to them if they’re hanging around the bar on Tuesday nights. 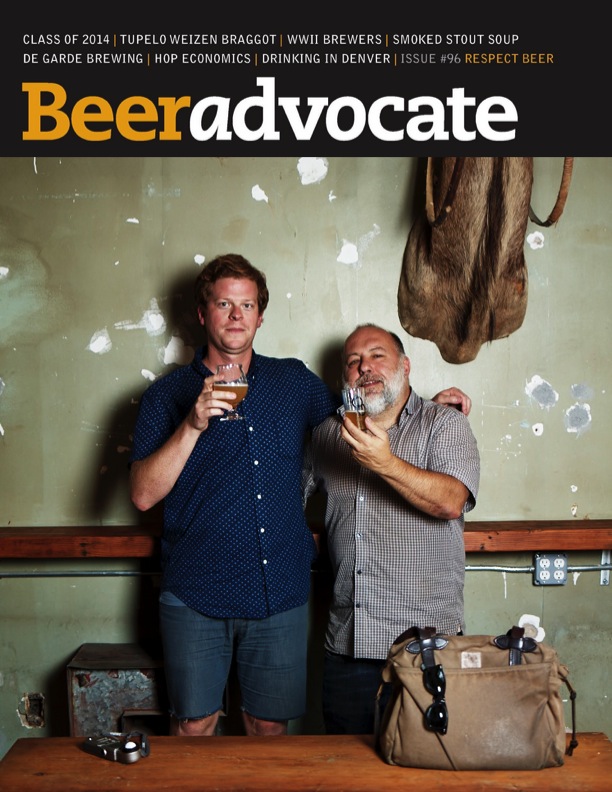 Looking back over the past 12 years (!!) from our home in the Brewmuda Triangle on East 7th Street, Jimmy’s No. 43 has been part of the larger NYC craft beer scene for more than a decade. We’re very excited to once again be the unofficial “clubhouse” for NYC Beer Week, which kicks off for us this Friday, February 24th, with the annual SimulTap, featuring a local beer made from local ingredients (we’ll be tapping a keg of “Something Ugly this SMASH comes,” a collaboration IPL from KelSo and Greenpoint Harbor featuring a State Malt and State Hop – aka SMASH beer – at 5PM).

Jimmy’s No. 43 has always prided itself on our support of local and artisan brewers around the world (want to know more about the beers that inspired us over the years? check out this article in Brooklyn Magazine), and we still feature many new brewers on our 12 rotating taps and even more beers by the bottle. Drop by and try the newest from IcoNYC (Queens, we have their High Ryse on tap right now), Industrial Arts, Threes and Other Half (among others).

Or maybe whisky is your preference! We have added a robust menu of hand-crafted spirits, which you can drink neat, on the rocks or in one of our signature cocktails – many of these brands are from the emerging distilling scene here in NYC. We also have one of the city’s best selections of cider and several NY State wines.

We’re also serving up a seasonal market menu, featuring both meat and vegetarian options, including our lasagne made with pork from Flying Pigs Farm, one of the sustainable farms we have supported over the years. And speaking of food and showing the love… we’ve nurtured quite a few impressive chefs over the past dozen years, including one of our first chefs, Philip Kirschen-Clark, whose inventive work in our kitchen was profiled many moons ago in this Grub Street article.

We always try to be inventive without being gimmicky, whether it was the city’s first sour beer week (we’ll be bringing back April Sours on Saturday, April 29th) or our annual Battle of the Belgians (which we are bringing to NYC Beer Week with an all-Trappist version – get tickets here).

So as we greet another NYC Beer Week (see our full list of events here), we’re proud of our rich craft beer heritage and how we’ve tried to be a part of the larger East Village community we call home. Hope to see you at the bar… you’re part of Jimmy’s beer family!

Did you know that the very first meeting of the NYC Homebrewers Guild took place right in our building way back in 1987? Yep, for 30 years now this group has been meeting right upstairs from Jimmy’s No. 43 at Burp Castle. In fact, it was where Garrett Oliver – James Beard Award-winning Brewmaster of Brooklyn Brewery  – first shared some of his early concoctions. Due to the three bars sharing the same building (the third place is Standings), we’re colloquially known as the “Brewmuda Triangle,” because you can drop in and never leave thanks to all the amazing beer!

We’re still connected to the larger homebrew community, offering up a spot for their annual BJCP (Beer Judge Certification Program) studies and as a drop-off point for homebrewers who are entering next month’s Homebrew Alley XI.

We’ll also be celebrating during NYC Beer Week (February 24th-March 4th), with a great line-up of events to include:

And if you prefer liquor over beer, never fear! Our expanded spirits program will include some exclusive guided tasting events this winter, as we launch Jimmy’s Spirit Council. Among the offerings:

Of course, we also have a great seasonal menu, which currently features our amazing lasagna, cassoulet and new hearty vegetarian items that are perfect for winter!

So come on by and enjoy the history of drinking in the Brewmuda Triangle as we keep pouring the best hand-crafted beers, artisan spirits, orchard-to-bar ciders and local wines.

Leave it to the French to create a peasant dish that has so many variations that we can host an entire cook-off around it! Voilà, this Sunday’s 9th Annual Cassoulet Cook-Off (taking place from 1-4PM on January 15th… a few tickets remain here). We have an incredible line-up of new and returning chefs, and we’re adding our own lamb cassoulet to the menu this week, so you can enjoy this classic meal yourself through the end of the month. Pair with wine or spirits (or even your favorite craft beer). It’s hand-crafted loveliness!

Or join us this Sunday and sample an array of cassoulet styles from the following chefs:

A portion of the proceeds will benefit this year’s non-profit partner, Brooklyn Rescue Mission, a food pantry and community garden in Bed-Stuy, Brooklyn.

On Saturday, December 3rd, Jimmy’s No. 43 welcomed back the best of Belgium with our annual Battle of the Belgians. We love bringing in these classic style of beers (from any country making Belgian-style ales) during the colder months, and we’ll be featuring Belgian and Belgian-style beers through our annual Liquid Lent, which this year starts in the middle of NYC Beer Week!

But we’re getting ahead of ourselves. On the Friday (December 2nd) before Battle of the Belgians, we had an esteemed group of judges (Paul Zocco of Zoks Homebrew, Certified Cicerone James Tai, Gregg Glaser of Yankee Brew News, Sam Barbieri of Waterfront Ale House, among others) gather together at the bar to taste close to two-dozen beers entered in this year’s event. Their winners—along with the People’s Choice—were announced both during Battle of the Belgians and on last week’s episode of Beer Sessions Radio™. The results of each category:

One of the judges, Paul Zocco, summed up the winning entries thusly: “It’s very interesting that all three category winners were beers with some presence of funk; be it Brett, lactic or acetic notes.”

People’s choice votes were tabulated during the event and the winners announced accordingly:

And a special mention goes out to Jimmy’s favorite (and the beer he drank all day): Solemn Oath’s Punk Rock for Rich Kids, a Belgo pale ale from Naperville, IL (near Chicago).

If you missed out on this month’s event, you have a chance to make up for it as we will be doing a special Trappist-only version of Battle of the Belgians for Liquid Lent/NYC Beer Week on Saturday, February 25th. Find out more details and get your tickets here.