The 12th Annual Cassoulet Cook Off will take place on Saturday, January 25th, 2020 in Williamsburg, Brooklyn!

Get your tickets now. 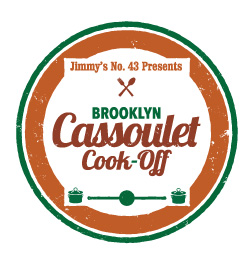 It all started in 2009 at Jimmy’s No. 43 in the East Village. Now Food Karma Projects presents the 12th Annual Cassoulet Cook Off on Saturday, January 25th, 2020 in Williamsburg, Brooklyn!

Chefs and Dishes Will Include:

Judges’ Awards and People’s Choice Awards Will be Given Out.

Awards are sponsored by Anolon and Kikuichi Cutlery.

“James Beard credited its popularity here to Americans’ “natural fondness for the bean” as well as the fact that its richness “lends itself to our favorite way of entertaining—the buffet.”Jimmy Carbone recognized the opportunity cassoulet presents to infuse this traditional French recipe with American culinary culture and created Cassoulet Cook Off. This event originated in his East Village bar and on January 25, Carbone will be celebrating the 12th annual competition among amateur and professional chefs to prepare the best version of the dish.”

“The iconic Southern French dish of white beans, duck and sausages, slow-cooked in its eponymous earthenware crock, is one of winter’s ultimate comfort-food dishes. Warm up with tastes of multiple versions at East Village gastropub Jimmy’s No. 43, where for the tenth year running, amateur and professional cooks alike compete to make the best version.”

“Jimmy Carbone…one of New York’s most enthusiastic cassoulet champions, takes a more lenient approach. “I look at the old Time Life cookbooks from the sixties, and it’s like, ‘Oh, New England baked beans,’ ” he said on a recent Sunday, at Jimmy’s No. 43’s sixth-annual cassoulet cook-off…The cook-off competitors stood over seaming buffet trays, doling cassoulet into small plastic bowls. A number of flagrant, if delicious, digressions from protocol were in evidence.”