The Top Beers, A Smash Burger Review, and More About the Slow Grains Celebration!

Thanks to all of our guests, whose enthusiasm for craft beer and smash burgers made this summer night one to remember! The event celebrated local grains and malts, bringing together brewers, maltsters, and bread-makers. The collaboration between Food Karma, Slow Grains NYC and Grow NYC Grains made the 9th annual NYC Brewer’s Choice an exciting feature of July Good Beer Month.

In 2014 this event jumpstarted interest among brewers working with regional malts. Five years later the number of regional malt facilities has grown. More farmers are growing specialty grains, select bakers are using regional flour, and more breweries – from North Carolina to New York to Maine – are making beer with malt and grain that is local to them. This all-inclusive event featured 12 select breweries making beer with local grain and malt. 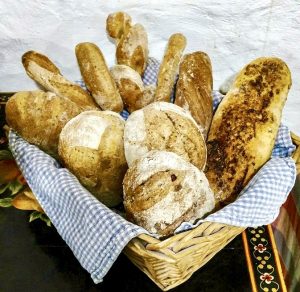 Some of Bobolink’s tasty bread loafs and baguettes made from locally sourced grains of the New Jersey region. (Image courtesy Bobolink Dairy and Bakehouse)

Indian Ladder Farms Brewery, NY featured their Indian Lager Farms, a 100% Estate Helles Lager made with Tinka Barley and hopped with Nugget, Colombus, and Crystal, all grown at Indian Ladder. This beer has hints of pine and grass with a clean bitterness. The Tinka barley was malted by Dennis Nesel at Hudson Valley Malt in Germantown NY, and the hops were pelletized at Northern Eagle in Oneonta.

Kent Falls Brewing, CT featured The Hollow. Named after their brewery’s beautiful neighborhood, The Hollow is Kent Falls’ house pilsner, brewed with their northeastern farmhouse sensibility. This beer is hopped with Brewer’s Gold; one of the five varieties grown on their farm  for the delicate character it contributes to a clean snappy lager such as this.

Saint James Brewery, NY featured Myrtille, their Blueberry Ale. Brewed with local blueberries from the North Fork of Long Island, Myrtille is a sublime reminder of summertime. It is slightly sweet and slightly tart with a purplish hue and a dry finish. It’s made with New York State wheat and barley, Long Island hops and proprietary Saint James Brewery yeast

Judges’ Notes: Soft & lovely, great use of blueberry, it’s there but not over the top like most blueberry beers, well made.

Foam Brewers, VT poured a beer made with barley grown in Vermont and malted by Peterson Quality Malt, 10 miles from the brewery.

Subversive Malting + Brewing, NY featured Drienbier, a New York Keller Lager with just enough malt character to make it complex and interesting, while still being light and quaffable. It is brewed with house-malted Pilsner, Pale + Vienna-style malts, and hopped with Hallertau hops from Pedersen Farms, the first commercial hop grower in New York State since Prohibition.

Alewife Brewing Co, NY featured their Lemondrop IPA, part of the brewery’s Lupulin Vibrations Series. This Imperial IPA gets its name and citrus flavor from the lemon drop hop.

Allagash Brewing, ME featured their Sixteen Counties Belgian Pale Ale. Named to honor the rich tradition of farming in the sixteen counties of Maine. This beer is made with with malted Maine-grown barley, unmalted Maine-grown red wheat, and Maine-grown organic oats. Sixteen Counties has a bright copper hue with aromas of lemon rind, flowers, and candied grapefruit. The first sip opens with herbal hop notes, wheat cracker, and citrus and ends with a balanced, dry finish.

A big thank you goes out to our judges panel!

The Good Beer Seal was founded in 2009 by Jimmy Carbone and 10 years later he is reviving this important insignia! During the last decade, New York has been witness to an explosion in the craft beer industry. As providers rush to meet the demand, The Good Beer Seal endeavors to separate the wheat from the chaff by identifying bars that serve quality craft beer and demonstrate a commitment to the community in which they do business. Learn more about the 2019 Good Beer Seal Awards here! 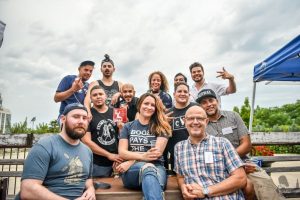 Here are a few of the 2019 Good Beer Seal Bar owners at managers at NYC Brewer’s Choice!

Beer Sessions Radio is a weekly audio ale salon hosted by New York City publican Jimmy Carbone. Through discussions with beer industry insiders and knowledgeable beer fans from across the country, Jimmy and his friends explore every aspect of the brewer’s craft from grains to pint glass and tasting to toasting. Listen online or wherever you get your podcasts! 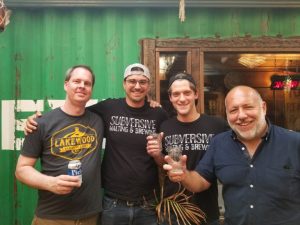