Food Karma Projects presents Pastrami on Rye, a featured event of New York’s Third Annual Rye Week! On October 16th, join us to sample the world of rye with rye whiskey, farm beers, breads, and more! Plus, as the producers of Pig Island and Brisket King NYC, when we think rye, we think pastrami! 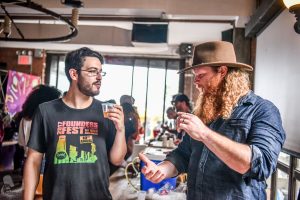 Pastrami on Rye Will be an All-Inclusive Food & Drink Tasting Featuring:

Craft Beer made with Local Grains and Malts

Pastrami on Rye is Proud to Host:

Lew Bryson has been writing about beer and spirits full-time since 1995. He was the managing editor of Whisky Advocate from 1996 through 2015. He is currently a Senior Drinks Writer for the Daily Beast, and also writes for ScotchWhisky.com, Artisan Spirit, and Bourbon+. Bryson is also the author of Whiskey Master Class as well as Tasting Whiskey.

From Lew: “If you look at historical periods like the 1950s to the 1960s, or even the 1890s to the 1900s, rye was a much more prominent drink. We believe it can be once again. I do believe a new generation are that key demographic.”

Food Karma’s founder, Jimmy Carbone will also be celebrating 500 episodes of his podcast, Beer Sessions Radio at the event! Join us and the team at the event to raise a glass to 10 years of food radio!

More About Beer Sessions Radio:
Through discussions with beer industry insiders and knowledgeable beer fans from across the country, this audio ale salon explores every aspect of the brewer’s craft from grains to pint glass and tasting to toasting.
Listen here!

“This ancient grain has an important place in New York’s history beginning with its cultivation in the both the Dutch and English colonial eras. Used for making rye flour, rye beer, and rye whiskey, the versatile grain thrived in New York’s glacial soil and northern climate. For hundreds of years it enjoyed a prominent place in New York agriculture.

In recent decades, its popularity waned. Consumer tastes shifted to lighter breads and beer. Bourbon became more fashionable than rye whiskey, and historic cocktails originally developed for rye whiskey began to be made with corn whiskey instead. New York farmers still grew rye as a winter cover crop but lacked a strong commercial market to sell into.

As consumer tastes shift once again, now toward spicier and more characterful products, rye is enjoying a renaissance.”

Learn More about the Intersection of Rye Whiskey, Farm Beer, and Grains:

From Jimmy Carbone on CulEpi

From the Experts on Beer Sessions Radio on Episode 409: NY State Grains & Rye